It was previously believed that long-term smoking cessation results in normalization of lung cancer risk; unfortunately, examination of the very large data set provided by the American Cancer Society Cancer Prevention Study II (CPSII) revealed that while smoking cessation is beneficial at any age, risk reduction is far less than complete. This article provides the simple methodology for calculating persistent risk of lung cancer in long-term ex-smokers.

In March 1993 Halpern and co-workers published a study titled “Patterns of absolute risk of lung cancer mortality in former smokers” in the Journal of the National Cancer Institute. This study resulted from analysis of more than 850,000 Americans living in all 50 states who participated in the American Cancer Society Cancer Prevention Study II (CPSII). Halpern reported the number of deaths per years of life in 196,529 current smokers, 212,050 former smokers and 444,210 never smokers and also stated the relative risk of lung cancer death in former smokers who quit at different ages, compared to (i.e. relative to) the risk of lung cancer death in current smokers. Updated CPSII data was reported in 2002 by Thun et al of the Department of Epidemiology of the American Cancer Society and was further validated in 2004 by Sir Richard Doll et al who published an extraordinary report, a 50-year follow-up study of cigarette smokers that was started in 1951. Sir Richard (October 28, 1912 – July 24, 2005) and Sir Bradford Hill (July 8, 1897 – April 18, 1991) were among the first to suggest, in a study published in the British Medical Journal in 1950, that a cause and effect relationship existed between cigarette smoking and lung cancer.

Consider the example of a man who started smoking cigarettes at age 17 and continued to smoke until age 55. At age 70, 15 years after smoking cessation, the patient was found to be suffering from a large right upper lobe lung cancer. Despite surgery and chemotherapy, the patient’s condition deteriorated and he succumbed at age 71.

Medical-legal implications of the persistent risk of lung cancer death 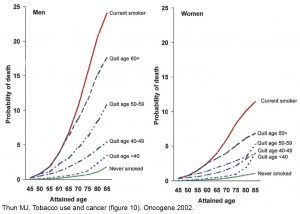