Epidemiological observations as of April 13, 2020

1. On April 6, 2020, the Institute for Health Metrics and Evaluation (IHME) of the University of Washington released its revised model which can be used to predict hospital bed use, need for intensive care beds, and ventilator use due to COVID-19. The basis for projections is a pre-publication paper by the IHME COVID-19 health service utilization forecasting team led by Christopher JL Murray. Dr. Murray is the Chair and Professor of Health Metrics Sciences andDirector of the Institute for Health Metrics and Evaluation (IHME) at the University of Washington. The IHME COVID-19 paper can be downloaded from https://doi.org/10.1101/2020.03.27.20043752 To access the IHME model on-line go to https://covid19.healthdata.org/projections

6. Epidemiological aspects of testing: there are 2 kinds of tests for the detection of infection with COVID-19. The first test that was available (and which is still in use) is a real-time polymerase chain reaction (RT-PCR) test. This test identifies a characteristic part of the RNA of the COVID-19 virus in a sample of the patient’s secretions from the back of the nose which must be collected by along (and uncomfortable) nasal swab. This test has been limited by a long turn-around time. At the end of March the FDA issued an emergency use authorization (EUA) for a new analyzer produced by Abbott Labs (ID NOW COVID-19).

This device, which is about the size of a toaster, is expected to be used at the “point of care”, i.e. at the bedside inpatient care settings. The device will be able to detect specific nucleic acid from the RNA of the COVID-19 virus within about 5 minutes. It is expected that the Abbott machine will be rapidly deployed to hospitals. At first, the test will be used primarily to confirm the diagnosis of COVID-19 in hospital emergency rooms. An even more important use will be for the determination of the presence or absence of COVID-19 in the respiratory secretions of health care providers who are either quarantined because of a supposed contact or are recovering from the disease and need to get back to the front lines of hospitals, including ICUs.

A second kind of test that is soon going to be available is a blood test to detect COVID-19 specific antibodies. In response to a viral infection, the body produces at least 2 kinds of antibodies which are immune chemicals capable of attacking outside invaders. The first type of antibody produced by the body during the early phase of infection is an IgM and the second kind of antibody which is produced during recovery and which contributes to long-lasting immunity is an IgG. Tests already exist which can detect anti-COVID-19 IgM and IgG. When cleared for market, these tests will be valuable for at least 3 reasons: firstly, the determination of anti-COVID-19 IgG antibodies in the serum of health care workers who have recovered from COVID-19 infection will identify most (about 80%) of those workers as immune and able to treat COVID-19 patients with less risk, and possibly even without personal protective equipment (PPE); secondly, the identification of elevated levels of IgG in individuals who have recovered from COVID-19 identifies those people as potential blood donors. Anti-COVID-19 antibodies from the blood of such donors can be used to treat other patients who have severe COVID-19 infection; thirdly, the determination of IgG antibodies in large sample populations will make it possible to calculate the overall prevalence of the disease in the population, despite the fact that many who have the disease are asymptomatic.

7. Many factors will continue to affect who is tested using either the Abbott system or an antibody test. It is probable that in areas where COVID-19 infection is common, many tests are performed on very sick patients. In contrast, in regions where there is much less COVID-19 infection and death, such as South Florida, many of the tests are performed on people who really do not need to be tested because they have a high likelihood of not being infected. As a result, the proportion of COVID-19 tests that are positive reflects the local frequency and severity of the disease. Florida, which overall has a moderate disease prevalence of 95.54 and a low death rate of 2.37 per 100,000 population, 201,005 tests for COVID-19 have been reported of which only 10.7% have proven positive. In contrast, the New York City Department of Health reported that as of April 13, 2010, of 107,228, tests performed, a very high percentage were positive. As shown on the graphic prepared by the NYC DOH, 62-79% of COVID-19 tests were positive when performed on residents who live in about half of New York City. So far 6,182 New Yorkers have died of COVID-19 and more will succumb before this terrible epidemic is over, but at the end of it all, many New York survivors will be immune. 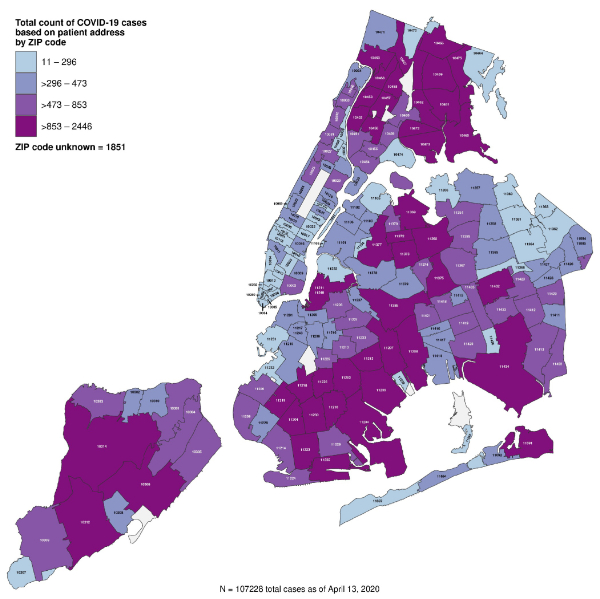 8. Relative to the rest of the country, it is apparent from the data shown above that the COVID-19 epidemic has been particularly severe in New York State and New York City. On April 13, 2020, the Institute for Health Metrics and Evaluation (IHME) model indicated that the peak of the epidemic in New York State occurred on April 10, 2020, with 800 deaths. According to the model, the New York epidemic will resolve precipitously (probably because of herd immunity) and will be essentially over by May 9, 2020, i.e. the first day when 0 deaths are anticipated. In contrast, the epidemic has been less severe in Florida, that is, the “curve” of the epidemic has been and will be flattened as the result of a very different lifestyle (no subways) and effective “social distancing” but the duration of the epidemic will be longer, only peaking on May 6 with 128 deaths a day (the latter is a revision because the peak was previously anticipated to be from April 26 to April 28, 2020), and extending well into June. On April 13, 2020, the IHME model predicted that by August 4, 2020, there will be a total of 14,542 deaths in the State of New York (75/100,000 or about 1.4times the present value) and 4,748 deaths (revised from the previous prediction of 3,999) in Florida (22/100,000 or 9.7 times the present value). For New York, the worst is almost over but for Florida, the epidemic will get worse before it gets better and Floridians, especially those older than 65 and those who have significant chronic disease, can anticipate a long siege. 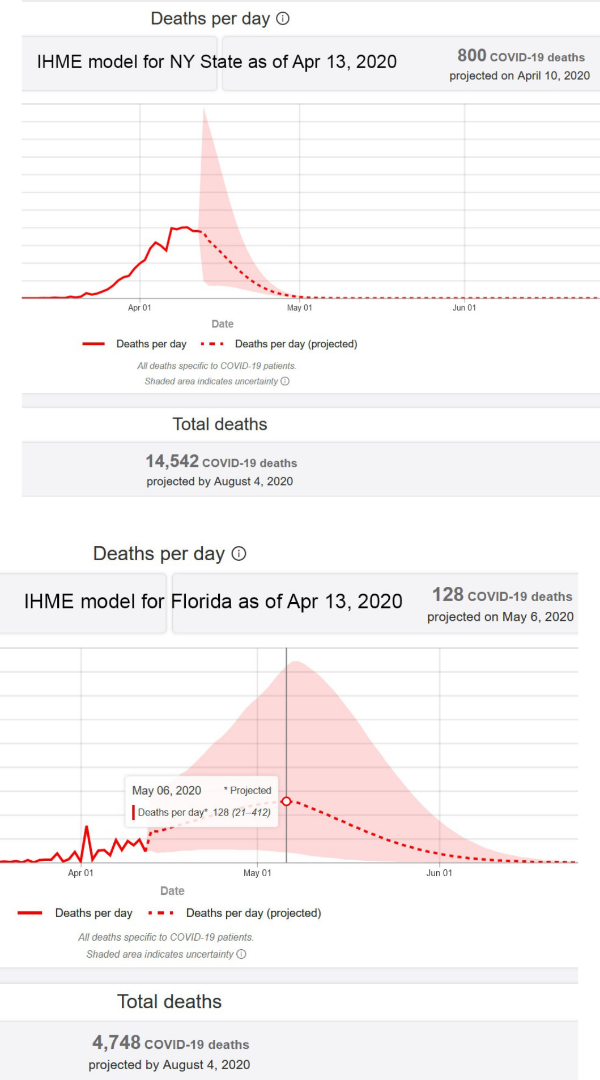 9. Additional evidence that age is a major risk factor for severity of COVID-19 illness: early in the evolution of knowledge about COVID-19 a distinct increase in risk experienced by older patients was identified in reports published by Chinese scientists. Evidence of susceptibility by age identified by the Chinese CDC and subsequently by the New York City Department of Health is shown below. 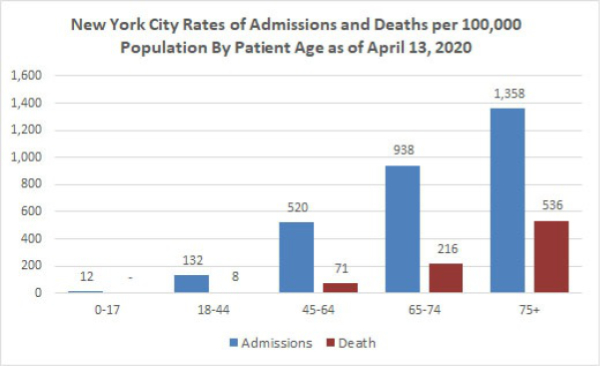 10. Underlying serious health conditions increase the risk of a severe outcome in COVID-19. The explanation for the markedly increased susceptibility of older people to this virus is still not available. One explanation that has been proposed is that with increasing age many people accumulate chronic illnesses such as obesity, hypertension, and type II diabetes which are normally manageable and not immediately threatening but which may decrease the potency of a person’s natural defenses. The Chicago Department of Health reports that as of April 10, 2020, it had identified 7,278 cases of COVID-19 and 212 deaths. Of 199 patients who died and whose medical history was available, 189 or 95% had at least one known chronic medical condition, most commonly diabetes, hypertension, and lung disease. See https://www.chicago.gov/city/en/sites/covid-19/home/latest-data.html The Department of Health of Louisiana (http://ldh.la.gov/Coronavirus/) reports the following prevalence of disease in the patients who died of COVID-19:

Asthma, which is a common chronic disease, was identified in only 4.66% of the Louisiana patients who died.

On April 3, 2020, the Morbidity and Mortality Weekly Report (MMWR) of the CDC released a special report titled “Preliminary Estimates of the Prevalence of Selected Underlying Health Conditions Among Patients with Coronavirus Disease 2019 — United States, February 12 – March 28, 2020.” This report is available online at http://dx.doi.org/10.15585/mmwr.mm6913e2

The MMWR evaluated data on 7,162 patients and reported: “Approximately one-third of these patients (2,692, 37.6%), had at least one underlying condition or risk factor. Diabetes mellitus (784, 10.9%), chronic lung disease (656, 9.2%), and cardiovascular disease (647, 9.0%) were the most frequently reported conditions among all cases. Among 457 ICU admissions and 1,037 non-ICU hospitalizations, 358 (78%) and 732 (71%), respectively occurred among persons with one or more reported underlying health condition…. the percentage of cases that resulted in an ICU admission was also higher for those with underlying health conditions (13.3%–14.5%) than those without these conditions (2.2%–2.4%).”Of 457 patients admitted to an ICU whose prior medical history was known, the prevalence of specific diseases was:

Of the 457 patients who required ICU admission only 4 (1%) were pregnant.

a. Median age was 11 years (range, >1 to 17 years).
b. 73% of children had the classic COVID-19 symptoms (fever [56%], cough [54%],shortness of breath [13%]) versus 93% of adults.
c. Other symptoms noted in children included sore throat (24%), headache (28%), and myalgias (23%), all at lower frequencies than reported in adults.
d. Hospitalizations were lower for children (5.7%) than for adults aged 18 to 64 years (10%), including fewer intensive care unit admissions.
e. 68% of children had no symptoms (there was incomplete symptom reporting).
f. 23% of children had an underlying condition, including asthma, immunosuppression, and cardiovascular disease.”

12. Emerging evidence of increased risk for African-Americans: On April 7, 2020 media reports appeared which warned of an increased COVID-19 mortality risk experienced by African-Americans. In an article titled “The coronavirus is infecting and killing black Americans at an alarmingly high rate” the Washington Post reported:

And in Illinois, a disparity nearly identical to Michigan’s exists at the state level, but the picture becomes far starker when looking at data just from Chicago, where black residents have died at a rate six times that of white residents. Of the city’s 118 reported deaths, nearly 70 percent were black — a share of 40 points greater than the percentage of African Americans living in Chicago. 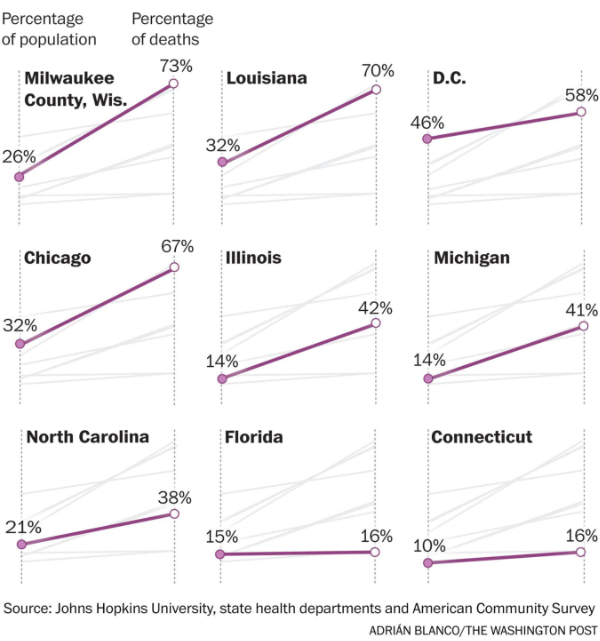 The Chicago Department of Health at https://www.chicago.gov/city/en/sites/covid-19/home/latest-data.html and the City of Chicago at https://datausa.io/profile/geo/chicago-il#demographics provide the information that I used to prepare the following charts:

The explanation for the reported increased susceptibility of African Americans to this virus is still not available but it has been suggested that it is due to the higher prevalence of certain chronic diseases such as hypertension and diabetes in the African American population. As noted above, the Chicago Department of Health reported that 94.5% of patients who died of COVID-19 had at least one known chronic medical condition, most commonly diabetes, hypertension, and lung disease.

1. Values in columns above which show the theoretical number of cases, prevalence, and mortality at“x10” estimate that the real number of cases is 10x greater than the reported number of test-proven cases. The actual number of cases is probably between 10 and 100 times greater than the number of test-proven cases. Mortality rates are calculated by dividing the number of deaths by the number of confirmed (tested) cases which are mostly severe or moderately severe cases. It is too early to estimate the mortality of hospitalized patients. Verity et al reported in Lancet Infect Dis (https://doi.org/10.1016/S1473-3099(20)30243-7): mean duration from onset of symptoms to death 17.8 days; also “In all laboratory-confirmed and clinically diagnosed cases from mainland China (n=70,117)… we obtained a best estimate of the case fatality ratio in China of 1.38% (1.23-1.53), with substantially higher ratios in older age groups…”